Mounts to farm before World of Warcraft: Shadowlands

With Blizzard announcing the new expansion, World of Warcraft: Shadowlands at BlizzCon 2019, many mount collectors are excited about what new mounts this new expansion might bring. Still, there is about 8 months of Battle for Azeroth left – in which we have plenty of mounts to collect! This article will list mounts that you want to collect before the launch of Shadowlands. After, they will be significantly harder (or even impossible!) to obtain. Let’s start the list with the most expensive vendor mount in WoW (to date?). The Mighty Caravan Brutosaur is a long-necked dinosaur that is mostly bought for the Auction House on its back. With this mount, you no longer need to go to Orgrimmar or Stormwind to buy your flasks, food and runes: they will always be just one click away. This convenience does come at a price, and a steep one: players need to save up a dazzling amount of 5 million gold to be the owner of this this cute-and-handy mount. Blizzard has let us know that after BFA, this mount can no longer be bought from the vendor. Instead this brontosaur will only be available on the Black Market Auction House, for the highest bidder. Better get saving now! This gorgeous void drake is a limited-time quest reward after defeating N’Zoth on Heroic difficulty. Like previous expansions, Battle for Azeroth too features an Ahead of the Curve mount for players brave and skilled enough to conquer the last raid on Heroic difficulty. Both the achievement and the mount will no longer be available when Shadowlands launches, so gear up and get raiding. Casual players can consider buying a boost from a guild or joining a community run. Krolusks are a relatively new mount type added in Battle for Azeroth. The Conqueror’s Scythemaw is a green coloured one that is a reward of the meta-achievement Conqueror of Azeroth. This meta-achievement requires players to complete a total of 9 achievements related to world PvP. The first 6 are ‘Tours of Duty’ in which you have to earn 1000 honor in War Mode in each of the zones in Kul Tiras (Stormsong Valley, Drustvar and Tiragarde Sound) and Zandalar (Vol’dun, Nazmir and Zulzadar). Furthermore you need to complete 4 actions in a party of 2 to 5 people: earn an honorable kill, complete a Rare Elite World Quest, loot a Player Bounty and loot a War Supply Chest. Finally, you will need to collect 10 bounties of slain players of the opposite faction and open a War Supply Crate from an air supply drop.

When Shadowland launches, the zones from Battle for Azeroth will have considerably fewer players wandering around. Therefore it is wise to get this achievement done before the zones are obsolete; it will require a lot more effort finding enough players in the zones for a 1000 honor next expansion. A smart way to complete this achievement is by doing the weekly ‘Call to Arms’ quest which alternates between the 6 zones. Since the opposite faction has their ‘Call to Arms’ in the same zone as yours, it is relatively easy to find opponents to battle. Do note that you can complete one zone out of the 6 for free by handing in the quest Victory in Wintergrasp in that respective zone. This ice cold water elemental is a guaranteed drop for one (Update: it’s now TWO drops per kill) raid member when defeating Lady Jaina Proudmoore on Mythic Difficulty in the Battle of Dazar’alor raid. For now. Come Shadowlands, Jaina will only drop her chilling mount for the few lucky ones who have RNG on their sides. This is similar to the mounts of raid bosses Gul’dan, Argus the Unmaker and Archimonde. Their mounts were a guaranteed drop during their relevant expansions, but are now locked behind a low drop chance. While not unobtainable, you can save yourself many runs and much frustration by killing Jaina on Mythic on a weekly basis now, ensuring you can ride through the Shadowlands on the back of your own Glacial Tidestorm. For this mount, the same applies as for the Conqueror’s Scythemaw: while not unobtainable later, you can save yourself a lot of headache by getting this tentacled brain before everyone moves on to the new expansion. This 5-person mount is a reward for solving a complicated riddle together with four other players. Read the guide on Warcraft Secrets to know exactly how to get your hands on this abomination. Since you need to find four other players willing to embark on this adventure with you, I encourage to try to find a group for this now, with many people still looking to add this mount to their collection. As Shadowlands is creeping nearer, more and more players will collect this mount, making it harder for you to find 4 like-minded people to get yours with. If, in Season 4, you complete the Rated PvP progress bar to 100% after reaching a rating or 1400 of higher, you will be rewarded with these two impressive mounts. Alliance players can only use the Warsaber, and Horde players only the Bonesteed. However, unlocking one will automatically unlock the other for your characters of the opposite faction. This grind will require some serious dedication, as you need to win 40 Rated Battlegrounds, 80 3v3s or 240 2v2s – after earning Combatant rating. Note that this rating requirement is specific to the match type you earned it for (so if you have 1400 points in 2v2, you will also need to get 1400 in 3v3 before 3v3 wins start earning you progress). 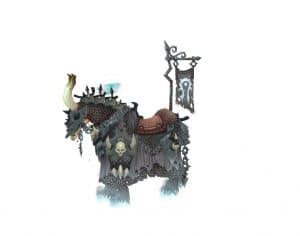 Since each PvP season has its own mounts as reward, you can only get these two as a direct reward by completing the requirement in Season 4. When Season 5 drops, you will need to first collect that season’s mount before you can move on to previous vicious rewards. Each subsequent time you fill your progress bar after receiving the current reward, you will receive a Vicious Saddle which can be used to purchase an older Vicious mount of your choice. Effectively: you can get these mounts now by filling the progress bar once, if you wait till a later season, you will need to fill your progress bar twice. That’s double the effort! This Brawler’s Guild legend is the only crocolisk mount currently in game. It is obtained through a lengthy questline in the Brawler’s Guild in which you solve the mystery of who murdered Quackenbush (Alliance) or Paul North (Horde). Given Blizzard’s earlier removal of the Brawler’s Burly Mushan Beast and the Brawler’s Burly Basilisk after their respective Brawler’s Guild season was over, we can only presume that Bruce will receive a similar treatment. If you want to get your hands on this unique mount model, better get brawling quickly!

All images in this article were created using Wow Model Viewer