Chiara’s passive is her stigma attack. It is more like a tool to empower other skills than a damaging attack: it increases Chiara’s movement speed or reduces the defense of enemies. Her passive does not have an interal cooldown; however, you can only use her Stigma four times against the same target.

Chiara uses corrupted energy to wound her opponents. It causes considerable damage ranging from 60-200 & 60% AP. It also reduces the movement speed of enemies by 30%. The cooldown time for this attack is moderate, between 8 to 10 seconds.

Use Chiara’s Depraved Prayer to hit enemies and protect her with a circular shield at the same time. The W-skill utilizse the corrupted energy of Chiara in the targeted direction and also conjures up a protective shield.

Chiara’s Mania attack is useful to create shackles that attach her to enemies. Enemies are trapped and get linked to Chiara, having a short timeframe to break this link. Enemies that fail to shatter the link are wounded and rooted for 1.5 seconds.

Chiara has one of the most impressive ultimate abilities. Using R, transforms her into a fallen angel and increases the damage of each attack she casts towards enemies. Her maximum HP level also increases every time Chiara uses her ultimate attack. While in the angel form, Chiara does damage to enemies standing near her.

During Plague Chiara can use Last Judgement crash down on enemies with the maximum amount of Stigmas. This deals massive damage, but ends Plague. Getting a killing blow with Last Judgement reduces the cooldown of Plague.

The Rapier’s weapon skill is Quick Cut – a simple charge that closes the distance between you and the enemy and deals moderate damage. You’ll want to use Quick Cut mostly for the gap closer it provides or when you are completely out of SP.

Chiara has only one weapon— Rapier— a type sword; however, you can try out different Rapier types available for Chiara in varying build types. Check out her builds that are commonly used by streamers and high ranked players while playing with the French heroine. This build utilizes Volticletto as the primary weapon. This variant of the Rapier weapon gives a variety of benefits: higher attack power (+47%), better attack speed (+35%), and also enhances the critical strike chance by +10%.

Besides these, this build also gives Chiara a sigh of relief by providing a cooldown reduction of +10%.

An easier 4-zoner route that will enable you to reach your desired items quickly. Start from the hotel and find the magazine and Sword of Shah Jahan from there. What makes this route the most lethal is that you’d find your weapon (Volticletto) so early (at your second zone, the pond). It’ll make you stronger than your opponent even after two zones!

If you want to go for the Laced Quiver instead of the magazine, you will need to find the feather. And for that, you’ll either have to kill the boars or roam around Hospital, Cemetery, or Forest. Choose whatever you fits the route of your duo or squad members the best. This build utilizes Mistilteinn as the main weapon of Chiara. The ability of Mistilteinn to bring skill amplification (+17%) differentiates this build from others. Besides, it has 15% cooldown reduction time; higher SP regen (+200%); and considerable critical damage (+30%).

However, it is a bit harder to pursue its items as well, and you will find tough competition over the items needed to complete this build.

The route for this build is quite lengthy, but also quite flexible. Path to build is a 5-zoner, and you will start your journey from Temple. The first zone would be a bit competitive to play around as you’d find the primary weapons there, and you should plan to get your stuff as soon as possible. Once you complete your items from Temple, move to the Factory. You can also sniff around Cemetery or Chapel to see what you can find before heading towards the Forest. Lastly, the order of zone 4 and 5 does not really matter. Pick whichever you prefer or the one that suits the need of your duo of squad mates most. 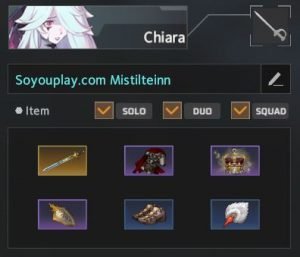 This weapon also utilizes the Mistilteinn; however, there are slight changes to the other items, making it easier to obtain. Check the route and accessories needed to see if this build fits your gameplay or not.

It’s a 5-zoner path, a rather lengthy one. However, you’ll be moving in a straight direction and on the edges of the Lumia Island. Do note that you need a Turtle Shell as well. You can find one by killing bats in Cementary or Temple or by visiting the Pond, Dock or Beach quickly. Turtle Shells are common, and obtaining one shouldn’t pose too much of a problem.

How to Play Chiara

How to use Chiara’s Passive:
Use her passive skill precisely to hit your enemies 4 out of 4 times. Once you do that, you’ll gain increased speed for 6 seconds. These 6 seconds are critical to dominating your opponents. Moreover, her passive will also reduce the enemy’s defense by 2-6%. You can use the stigma attack of Chiara with her other fatal attack to harness the maximum damage.

How to use Chiara’s Q:
You can use the hand of corruption in two ways: either use it circularly or a straight line. However, if you want to use corrupted energy in a straight line, you will have to hold the skill down for 0.5 seconds.

Moreover, her Q skill has more damage and greater length to reach if used in a straight line.

How to use Chiara’s W:
You can use the depraved prayer skill of Chiara quite often, as the SP level cost is moderate, and skill damage is lethal if used correctly. The protective layer created by the button W will remain active for 6 seconds. This shield of Chiara can absorb up to 260 damage.

It is important to mention that you can also reactivate the shield and make it more deadly, as it explodes— if activated a second time. Be careful if you are planning to do this though; the shield needs to be intact (so cannot fully deplete) for at least 3 seconds in order to be reactivated.

How to use Chiara’s E:
Use her E skill to fire some projectiles in the direction of your opponents. This attack is a useful weapon of Chiara as it forms a shackle in a targeted area— and if she is successful keeping her opponent in it for 1.7 seconds, the enemy receives a lot of damage and is rooted for 1.5 seconds.

How to use Chiara’s R (Plague & the Last Judgement):
Chiara’s ultimate (Plague) is very useful in the middle of a fight. Activate this skill of Chiara in the middle of dealing with your opponents – to deal as much damage as possible –  as the more damage this ultimate attack causes, the better HP recovery you get.

Besides, try your best to kill the enemies with the Last Judgement attack. If you do so, the cooldown time will reduce by 50% to use her Ultimate once again.

How to use Chiara’s Quick Cut (weapon skill)
This skill allows Chiara to charge towards enemies. Use to grab the fleeing enemy and get under their skin with movements and some damage. If you hit enemies with her quick cut, you’ll gain a bonus to use this skill again— so be precise and accurate.

Use the witty attacks of Chiara in the order above to gain the maximum damage in given circumstances. Use her E skills to root your enemies first. As you do that, you will have extra 2 seconds to get ready for the next sharp attack of Chiara. Also, at this time, you can create a shield before your opponent with the W button. Once you do that, hit your enemy with the hand of corruption attack to knock him/her down.

After these attacks, you should aim to get your ultimate move ready. Do make sure you have your enemy on low enough HP to to reduce the cooldown time of her Plague attack. If the damage of her abilities was a bit too low to down your enemy, use your weapon skill to perplex your enemies as a last resort.

Attack combos:
It is better to use her Hand of corruption and Mania quite often. You can also combine any of the two attacks with Depraved prayer to gain the maximum output.

Q attack + Last Judgement + Weapon ability: a lethal combo of attacks:
You can use Chiara’s hand of corruption attack, with her ultimate & sharp cutting weapon skills to deal more damage.

Moreover, you can also make your own combos once you have plenty of experience playing with the fallen angel. Finding combinations and skill orders that work for you often turns out to be the most lethal in practice. So feel free to mix a variety of attacks and craft your own winning combination.

Teams and Match-ups for Chiara

Chiara is a strong character who possesses some fierce attacking capability to take on any opponent. However, a few players can give the fallen angel a tough time. Let’s check out her possible matchups for the duo and squad gameplay.

While planning to make a duo team with any character— try to match up with Hyejin, Yuki, Sissela, Nadine, and Magnus.

Yuki is a player who can do a lot of damage with his fierce skills. Matching up with Yuki will provide you extra margin to dominate squad players of Xiukai and Soichi. Whereas teaming up with Hyejin, Sissela, or Magnus— allows you more SP level that can help in dominating duo matchups like Li Dailin & Fiora.

Chiara is a top-tier character that is strong against very aggressive characters who tend to jump in head first. She performs her best with characters such as Hyunwoo and Hart. Chiara, along with these players, can tear apart players of dive composition with little defensive capabilities.

Be careful of squads containing Magnus, Sissela, and Aya. Groups of this nature have both attacking as well as defensive skills, and are harder to burst down.

Besides these mentioned combinations, you can try out your mixup as well. Whatever you do, it is vital to team up with your partner(s) at the right time. It is best to be with the rest of your squad (or duo) in zone 2, or by the third zone at a maximum. Walking around alone in the late game is dangerous, and the chances of you being killed by a duo or squad while you’re on your own get bigger and bigger the longer the game continues.