Although Emma has only one weapon, she is still amazingly flexible. You can make lots of different builds with her. In this article, we will address the following aspects of Emma:

Her skills; Builds that win you games; Playing guide; Suitable duo & squad characters; and her Strengths & Weaknesses. So, without further ado, we are jumping into her passive and QWER skills.

Emma is a skillful character to play with; the magician character can damage opponents with cards, coins, or even her hat. She has a lot of tricks up her sleeves.

Q attack of the Magician is Dove Dealer. It is a direction targeted skill shot that can be a combo attack once she unleashes her dove. As you use her Q skill, she will release a dove, and when you use the Q button again, a dove will also hit the enemy with a card, reducing the enemy movement speed and her cooldown time at the same time.

What magician does not use a hat for tricks?  Emma, being a magician, uses her hat to cause damage. The hat trick attack is a location-targeted attack that provides both damage and vision to her. If the hat hits an enemy, the cooldown for this skill also reduced by 3 seconds.

Emma performs a more intense magic trick by turning her opponents into rabbits. You can use the E button for utilizing this attack. Every time she uses this trick, she gains her HP level by giving her SP level. Poly-morphing is an awe-inspiring skill of her to slow down a charging animal or any opponent character.

Bring some change in atmosphere with the R skill of Emma. She can change positions with Dove, Hat, or even Polymorph rabbit. She instantly perplexes her standing opponent characters or animals by teleporting herself to a different location.

Caltrops is a targeted area-of-effect attack that fills the floor with slowing and damage dealing caltrops. The damage is significant, but don’t underestimate the movement speed reduction. This is a formidable build with bursty auto-attacks. As the American Magician is mostly dependent on strong auto-attacks, this build empowering htem allows you to dominate your enemie.

Items needed for this build:

The route is quite simple and straightforward. You have to build your items in a 4-zoner path— starting from Hospital right till the Avenue. You will be able to complete all your tools in the Avenue zone. You’ll want to dash through the Avenue while looting things on your path to get to the Alley first, then track back to Avenue to collect your last items.

Note that you need a Tree of Life for this build as well. This build might make you feel a bit weaker in terms of CDR options; but, you will have an improved max HP, better skill amplification, and more max SP once you try out this build. It provides you a better mana regeneration speed, which is good since mana is the biggest problem you will face while playing the Magician. Overall, it is a nice build to play around with Emma, and you must give it a shot.

You might feel the 4-zoner route as a bit different; but here is what you should do. Once you start from the Temple zone, you should keep your eyes on non-weaponry items, such as three cloth pieces, Monk’s Robe, paper, and the hairband items. Once you collect these from the temple, you will move to the pond to find the imperial crown.

It is a winning build route in a way that you will be able to get your hands on the Imperial Crown, Sheath of Shah Jahan, and Dragon Dobok in the first three zones. You will be quite a strong character and that too very early. You can also make a transition in your items once you have built them properly. You can change the Sheath of Shah Jahan with the Bracelet of Skadi in the Forest Zone.

The needed Steel Chain can be obtained by killing boars or by quickly looting one from the Cemetery while crossing it to get from Hospital to Chapel. 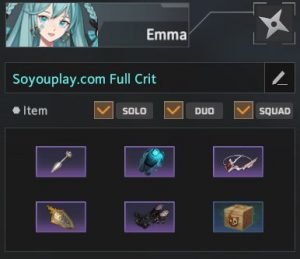 And finally, you can try out this build in which Emma utilizes the Flechette Shuriken as a weapon. The weapon makes this build so strong as this variant of Shuriken has an attack power of +85— the most attack power a Shuriken can have with Emma. Moreover, the weapon also has a movement speed of +0.2, which comes in pretty handy. Critical damage is also  +40% higher.

Moreover, you will also have an increased SP level with the Crystal Tiara (+700 SP level). Other than this, SP regen is better with the use of Bucephalus in this build. So, overall, a useful build type that can win you games for sure!

A four-zoner route may sometimes be tricky; but you can dominate your enemies once you build all your items. Be careful about finishing out in the last zone (Alley) however, as it is a bit far from Chapel, and you will have to go there for the Schrödinger Box.

Obtain the Turtle Shell by killing bats or by going into the Pond, Beach or Docks for a few seconds. They’re really common, so finding one shouldn’t cause you too much trouble.

How to Play Emma

Emma has only one weapon, and that is Shuriken. You can hunt for different types of Shuriken weapons in your builds as per your choice. Try out different Shuriken types, and see which one proves to be a winning Shuriken for you.

How to use Emma’s Passive Skill:

You can maximize the damage of her passive skill by using it with any of the QWER skill attacks. You can utilize these passive attacks of Emma to gain HP level as well, as she absorbs HP level by 3-9% of her maximum SP every time she makes a passive move.

How to use Emma’s Q:

Throwing cards at enemies is fun for Emma. Try to harness the maximum damage results along with gaining SP level by hitting the enemy at least once. However, if you want to reduce enemies’ movement speed too, you should practice aiming her dove cards perfectly to hit twice.

How to use Emma’s W:

Her hat trick attack is the most damaging skill among all. It is a good move with moderate cooldown time. Use it when the enemy is closer to you.

You should use this skill quite frequently. The best thing is: you can also use Emma’s hat trick attacks over walls or terrain!

How to use Emma’s E:

Bunnymorph attack is more about reducing the speed of your opponent rather than causing any damage. It is a fascinating trick of Emma, and the best time to utilize the E button is when the enemy is dominating you. You can silence your opponent for a while until you charge on him/her again.

The best place to use it would be in a squad or duo gameplay. You can have a small moment to recover once you use the E button if the enemies are charging at you from multiple sides.

How to use Emma’s R:

Change is more like a combination of Q & W attacks. Emma uses it to change her position suddenly and cause damage in the process. It is more like the fire escape skill of Adriana or the moving turn skill of Aya. The only difference is— the capability of Emma to do the damage is immense. You can use this skill again to escape a charging enemy and also cause some damage meanwhile. It will root the enemy between a dove or a hat and tear him/her apart.

You will not be able to use this skill all too often, as it is very heavy in terms of SP cost. So, whenever you use it— use it wisely and effectively to deal the maximum amount of damage.

Drop some caltrops in the enemy path and cause a significant amount of damage when they walk over it.

Always try to proc her passive skill first and then look to charge her QWER skills in the mentioned order to gain the maximum advantage with Emma.

Of course you can also try another skill order if you disagree with us, as each player has his own playing experience with each skill of Emma and rates each attack of her in different ways. But the above-listed order is what most of the streamer and ranked players players do to win solo, duo, and squad games with Emma.

Having effective combinations with Emma is of great importance to cause more damage and to play wisely. Following are some of the most useful and the most effective attack variations:

A bunny always loves to run and leap, and so does her victims. Well, you can do a great deal of damage to your enemy once Emma polymorphs him/her and then immediately use caltrops for more effect.

You can also use the caltrops  in combination with her Change attack using a hat trick. Throw some caltrops once she drags the enemy inwards to cause massive damage.

The best way to ensure you hit the Hat Trick is to slow down your enemy first. Bunnymorph is a tricky skill for Emma to have up her sleeves. To use it most effectively is critical at any stage of the game. For this purpose, you should try to use these two skills together.

Teams and Match-ups for Emma

Choosing the right character to match with Emma while playing with Duo or Squad gameplays is paramount to winning games. You should not make the mistake of opting for characters that do not match with her nature. If you do so, you will ultimately end up losing duos and Squads. So, to make things simpler for you, we have come up with a list of players you should align with— to ace the solo, duo, and squad gameplays in the Eternal Return: Black Survival.

Emma has lesser mana regeneration speed. So, to compensate for that, try to team up with players like Chiara or Adriana. These players will give good company to Emma.

Once you team up with these characters, be wary of the duo combinations of Yuki & Sissela or Magnus and Adriana. Once you have weathered the storm, you will tear apart players such as Jackie & Xiukai or Hyunwoo & Xiukai.

Emma is a character that fits well in most standard compositions. She can match up with Sissela, Magnus, and Aya. The best thing about this combination of squad gameplay is their attacking and defensive skills.

You can also create your combinations by playing more and more games and trying out different combinations. Remember that discovering out your own method and techniques in the Eternal Return: Black Survival yields the best results, no matter which expert you try to imitate.