Sukuzi Aya, the rookie cop of justice, is one of the top-rated characters to play in Eternal Return: Black Survival. She provides multiple options in terms of her weapons and has different gameplay with each weapon type. Let’s look at her skills, Builds, Playing guide, Team-ups, and Strengths & weaknesses.

The Japanese police officer utilizes the following skills to take down her opponents.

Her passive move is a defensive one; she creates a barrier to protect herself when she’s attacked. It saves the cop of justice from sudden attacks of both opponent characters and animals.

Double bullet shots are the Q skill of Suzuki Aya. The Japanese girl can fire two straight gunshots targeted at the enemy. Out of these two shots, the second bullet does more damage than the first one — with skill damage up to 180.

Aya fires ten straight bullets without giving any sigh of release to the enemy. These steady shots cause considerable damage to the opponent, but their direction is fixed.

Aya can dash in any direction upon enemy attack. This skill enables her to escape whenever she feels dominated by opponents. It is more like the fire escape of Adriana. However, Aya’s E button consumes more SP than Adriana’s.

Moreover, you can also use the E button while playing with Aya to reduce the gap between a fleeing or running enemy. Lastyly, the cop can also use E to quickly dash through walls.

And finally, Suzuki Aya unleashes some thunderous light into a circular shaped area. The move is highly effective to stun the enemy for a while. Having paralyzed the enemy, the rookie cop of justice finally shoots at him/her to seal the deal. However, practice the game well before using this move as it costs a larger SP level and requires the timing to be spot-on.

The weapon skill of the Pistol increases your movement speed while reloading your weapon. Using Moving Reload also reduces the cooldown of your other skills.

The weapon skill of the Assault Rifle lets you build stacks of Overheat for each auto-attack. After gaining sufficient stacks, this ability can be activated to increase your attack speed and add a knockback to your shots for a short while.

The Sniper’s weapon skill lets you enter sniper mode. You gain range of vision, but in a narrower angle. Select an enemy in your field of vision to focus on them. After a quick alert, you will shoot a devastating shot their way. 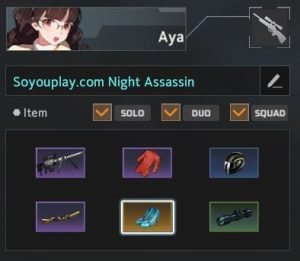 This build is a favorite one for many players who play with the cop of justice. The fun part is that its route is made of only 3 zones. And once you quickly build your items, the police officer will have no restraint in killing people with a sniper gun.

We suggest you use a three-zone route for this build. The idea is to build through different zones until you reach the beach area, where you optimize your weapon and kill the people with sniper vision during the night time. One thing is for sure:you’ll have a lot of fun playing with Aya in the night time with an intervention sniper rifle.

Note that you do need to collect a Tree of Life to craft the Glacial Shoes. 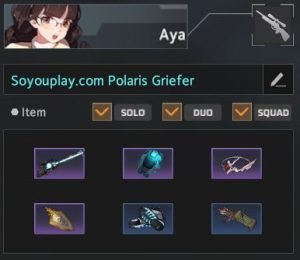 Secondly, you can try out this build of the rookie cop of justice with a sniper rifle weapon. This build can help you a lot in winning games, especially squad and duo gameplays. You can also win games using this build for solo gameplay. The best thing about this build is that you utilize Polaris as a weapon. Polaris is a deadly sniper rifle to have in the hands of the police officer. This weapon has high attack power and is the only sniper rifle that has an attack speed of over 40%! Following are the items you’ll need in Polaris Griefer Sniper Build:

Although the route is a bit long, and the fifth zone is quite out of the way, it’ll make you the strongest players among your enemies by the second zone (since you will have your weapon ready by then already). The long route is more than worth the result in the end, as this build is extremely strong once you have all gear required. 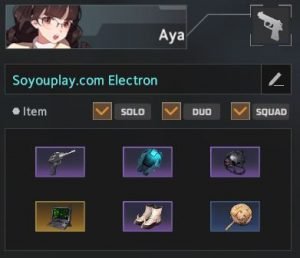 This build uses the Electron blaster, a Pistol weapon. Electron Blaster is a fatal type of pistol  available with Aya. This weapon has an attack power of +65, attack speed of +50, and extra attack damage of +28.

Route for this build:

It is the most commonly used build route. However, be careful while entering the second zone, as you may find a Jackie or 2 roaming around here, and you do not wanna fight them yet. And finally, the most useful build among all is the Attack, Crit, and Defense buildup with Aya; it is highly used by streamers who play as the rookie cop is easily attainable with a high rate of success. The items that you’ll need for this build are:

How to Play Aya

You can utilize her passive and QWER skills in the following ways to harness the maximum advantage while playing with the rookie cop.

How to use Aya’s Passive:

The passive skill of Aya doesn’t cost you any SP points. However, it has a 30-sec cooldown time. This cooldown time reduces by 2 seconds every time you use her basic weapon attacks. This skill reduces the damage caused by enemy attacks, and since it’s entirely passive, there isnt all too much you can do to maximize its use, apart from shooting a few chickens or other easy animals when the cooldown is high and you don’t feel safe.

As mentioned before, Aya’s Q fires two straight bullets at an enemy, with the second bullet dealing more damage than the first. However, use the right click of your mouse— before using her Q attack to make it a 3-fire attack rather than two bullet shots. In this way, you can cause more damage.

Her skill of firing ten straight weapon shots is a real plus. You can use her W attack to subdue animals that have fixed movement. However, Aya needs to be pinpoint accurate to make full use of this skill. And, you can immediately cancel this attack by pressing W again if your target is slightly off. Never feel hesitant to cancel this attack if your bullets miss your enemies, or you’ll have no advantage while losing a significant amount of SP.

Utilize the E skill of Suzuki Aya very cleverly. You can use this skill for multiple purposes: for chasing down your fleeing enemy, for creating a gap between the attacking character or animal, and even for escaping through a wall. Moreover, you can also use this skill for reaching the containers and boxes in no time.

And finally, use the R skill of Aya to stun your opponents. You can launch other skill attacks over the paused enemies to completely knock them down. It is a lethal attack that provides you a moment of relief by freezing your opponent. Make sure to keep the rookie cop of justice uninterrupted while using this skill, or it’ll have a lesser impact.

How to use Aya’s Sniper Mode:

This skill enables Suzuki Aya to track her enemies even far from her, using a sniper rifle scope. However, the enemy is alerted once she sets her sight on her target, making it a bit hard to actually land the shot. Moreover, the vision of Aya also narrows once you use this skill. So, be careful to see if there is any opponent character or animal near you before you start using the sniper.

The weapons of Aya are mostly guns, each with limited ammo. These weapons require reloads after running out of bullets. Be careful about that, as you may run out of ammo in the middle of a fight. Whenever it happens, use the E skill to escape for a while until you manage to feed your guns. Try to always keep your gun fully loaded between encounters; you never know when someone is coming for you.

In what order should you level Aya’s skills?

The order of Aya’s skills is listed below:

The main reason behind leveling the E skill before even a steady shot is that it provides mobility and speed to Aya. This skill provides the rookie cop with multiple benefits, the main one being chasing and fleeing from enemies. Aya is pretty slow in comparison to other characters, and early maxing of the E skill minimizes this disadvantage.

You can use Aya’s attacks in a variety of ways; her attacks provide you different options. However, to make the most out of the rookie officer’s passive & QWER skills, use her lethal strikes in the following combination:

Teams and Match-ups for Aya

For Duos, Aya can tear down her opponents while playing with Hyunwoo, Isol, Silvia, Hart, and Jackie. The skills and needs of these characters match with Aya’s in the best possible way. However, you need to tweak a little bit with the routes which you’d opt for these players. For example, the path, in Duos, while playing with Hyunwoo, Isol, and Silvia would be: Archery Range> School> Hotel> Beach> Forest; whereas, while playing Duo style of play with Hart and Jackie, you’ll have to take Temple> School> Forest> Hotel> Beach path.

Aya, when playing in a squad with Sissela and Magnus, forms a group of players with standard and balanced skills, i.e., defensive and attacking. If you go out with this squad, you can profit from the attacking and hammering capabilities of Meta Magnus as a team.

Characters to watch out for:

You need to be careful of the characters with both high damage causing skills as well as a strong line of defense. Characters like Hyunwoo, Chiara, and Hart are a perfect example.

Characters you can dominate:

Aya can subdue characters with a dive nature. This type of group contains players with attacking strategies and a lack of defensive skills. A squad of players containing Hyunwoo, Jackie, and Xiukai is the best example of a dive squad.

Let’s highlight her unique skills along with some of her weak areas.