Jackie is one of the strongest and most popular characters in Eternal Return: Black Survival. She provides you variety of options in terms of her weapons. Besides her weapon options, she also has useful passive and QWER skills that can win you games. We will shed some light on Jackie’s skills, builds, playing guide, duo and squad gameplay, and strengths and weaknesses. So, let us start with the passive, QWER, and weapon skills of Jackie.

Whenever Jackie slams her opponents with her passive skill, she gains some increment in her attack power. The skill duration ranges from 20 to 30 seconds. If she procs Bloodfest on bears or opponent players, her attack power increases by 8-40%. However, if you get the buff by killing animals (non-bear), the attack power will increase by 3-15%.

Her Q skill is tremendously rewarding for Jackie. She unleashes two sword attacks in no time. Enemies under her sword blades keep on bleeding, which causes damage. The cooldown time for this skill ranges from 8 to 10 seconds, and the SP cost is between 50 to 70.

The W button increases the movement speed of Jackie by around 20%. The skill duration for the Adrenaline Burst is 5 seconds, the SP cost is between 90 to 130. Cooldown time is also moderate, i.e., 13 to 17 seconds. You can also heal Jackie and deal extra damage to your opponent by damaging bleeding enemies during Adrenaline Burst.

Jackie jumps in the targeted direction and causes damage with her leaping strike. She can jump as far as 6 meters. The cooldown time for the leaping strike ranges from 11 to 19 seconds and the SP cost is between 70 to 130 for this skill.

Jackie’s ultimate turns her into a murderer, for sure! She just cuts her targets to pieces with this fatal move. Her R skill is the most damage causing attack among all of all her attacks. However, the cooldown time for this move is also higher, i.e., 80 to 120 seconds. The SP cost ranges from 120 to 180 for the ultimate skill of Jackie.

There are two parts to this skill: Cloak and Dagger. The cloak skill makes Jackie transparent and also increases her movement speed for a few seconds.

The Dagger skill will allow you to go behind enemies as a surprise move. This skill will enable you to change your position while using her Normal attacks of Jackie. It does critical damage as well as a certain percentage of the enemy’s current HP. The cooldown time for this skill is 40-45 seconds. Therefore, you need to be wise and precise in harnessing the Cloak and Dagger skill of Jackie.

Parry is the two-handed sword skill of Jackie; it is both defensive and deals damage. Jackie raises her sword to protect herself from enemy attacks. And after that, she can run towards enemies to cause damage with her two-handed sword.

This skill makes you passively accumulate stacks of Berserk whenever you use an auto-attack. You will gain a single stack for each of your Normal attacks. Activating the Berserk skill will increase the attack power of Jackie depending on the number of stacks she has and on her current HP. The cooldown time for this weapon skill is 50 seconds.

You can charge in a given direction with your dual swords to cause damage. This skill causes considerable damage, and you can use it again if you manage to hit an enemy. This weapon skill has a cooldown of 40 seconds if you miss, so try your best to hit your targets in the first go. This build is quite defensive and slower than Jackie’s other builds. It will make you a tough player to beat in the latter part of the game. However, you will have to conscious of the early gameplay. You will be using the Arondight as your prime weapon for this build. You can complete the process to acquire this weapon in the factory.

You will have to go through four zones to collect your weapons for this build. Going from Alley to Factory may seem a bit far, but you can eliminate most travel time by taking the teleporter. Jackie will become stronger zone by zone, so be wary of the competition in the third and the final zones. The best part is that you will complete your weapon by the end of your factory visit. Then, try to kill as many players as you can afterward. You can also try an Axe with Jackie. In this build, you will be using the Scythe as your prime weapon. This weapon is handy in providing massive attack power (+130) and also a considerable skill amp (+18%). Besides, this weapon also has an increased attack range of (1%). Overall, it is more like a tanky build full of tank items, and you can win games with this build, for sure!

This is a five zoner build path. You would start off your journey from Cemetery. Now, keep in mind that Cemetery can be a very contested place to start off. You would also find a ton of items from the Cemetery. So, be quick in your movement and acquire all the necessary gadgets as soon as possible. You should complete your weapon journey by the end of the second zone. After that, do whatever you want and kill as many players as possible. 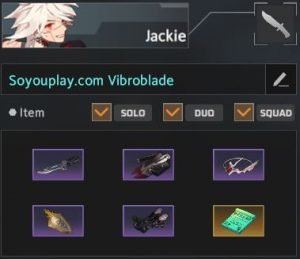 Thirdly, you can opt for a dagger. You can use this build to win games while trying your hands at Jackie’s Vibroblade dagger weapon. This knife type will give an attack power of +50%, Attack Speed of +30%, and a bit of Movement speed (+0.1). This is a crit build, and you will be using the items that are highly useful in doing critical damage.

In this build, you will have to pass through five zones. You may feel this route a bit longer; however, most of the zones have teleporters, so you won’t have to walk that much distance. The best thing about this route is that it is a two-zoner weapon build-up. You should have the Vibroblade up your sleeves by the end of your Hotel journey. And finally, Jackie’s strongest and most popular build; Dual Wield Jackie. This build is so strong that it’s almost unfair; very fun to play, but very frustrating to play against! It is mostly an attack speed enhancer build as Dioscuri provides an attack speed of +60%.

This double swords variant also has a fiver-zoner build path. You will start in the Dock, which is relatively less competitive. Find your items quickly and move towards the second zone. In Uptown, you should be able to finish your weapon. This is what makes this build good enough to win you games is its early weapon building path. The weapons are what you really need; the rest is just a bonus!

The first three zones are closer to each other. However, you will have to move a considerable distance to reach the other end of the Lumia Island for finishing all your items. With a double swords weapon in Jackie’s hands, you will easily roam around different zones to complete all the required tools.

Note that this build is listed under Dagger builds, but that it can also be started with a sword as a starter weapon.

How to Play Jackie

Bloodfest is an immensely fatal skill to have with Jackie. Try to keep the buff up constantly by killing animals when walking around. After you kill an opponent, you attack power is enhanced even more – a perfect opportunity to hunt down another unsuspecting enemy.

This skill is handy while enemies are closer to you. Use this skill quite often as it has a shorter cooldown time and causes considerable damage. Using other attacks over a bleeding enemy will make this move even more deadly for your opponents.

Use this skill to run away from an enemy or run to catch a fleeing target. The best reward that you get while using this skill is HP regen. Harness the W button over a bleeding enemy and gain some decent self-healing while damaging them.

Use this skill to cause damage and reduce the movement speed of enemies. If you hit bleeding enemies with this skill, their movement speed will decrease even more (40%). Cooldown time and SP cost for this attack are moderate, so you should use this fatal move more often.

Jackie takes her chainsaw out and tears apart her opponents with her ultimate skill. You should combine her ultimate attack with her leaping strike to cause more damage.

Using the Cloak skill to vanish away from enemies is a good option. This skill will provide you a sigh of relief against an aggressive enemy. Sometimes, running away from dominating opponents or animals is a useful option if you feel like you’re being defeated.

Moreover, the dagger skill is very useful if you find yourself encircled by enemies. This skill is a real bonus for Duo and Squad gameplays, where you may find yourself surrounded.

Try to hit enemies with this skill as you will get a bonus to use it again for doing so. This skill will dash you forward and make auto attacks. The best spot to use this weapon skill would be in an area surrounded by enemies. It is a handy skill in Duo and Squad gameplays.

Use most of her attacks over bleeding enemies:

Jackie does some extra damage while she casts her attacks over bleeding enemies. The best way to harness the maximum damage is to use her W, E, and R skills after using the Hack and Slash move to apply a bleed.

Teams and Match-ups for Jackie

We would highly recommend keeping Aya, Isol, or Magnus on your side. These players have both attacking as well as defensive skills. Aya and Isol are good to team up with, as they provide long-ranged shots. However, the difference in weapons would mean that you may not start off your journey together.

You can tear apart Duo teams like Adriana-Zahir, Fiora-Hyejin, or Luke-Li-Dailin. However, you need to be careful of Duo teamssuch as Xiukai-Hyunwoo, and Hart-Aya. They can match your damage output and be very dangerous when they have a level or item lead.

For Squad composition, Jackie seems to be happier to team up with dive-characters, such as Hyunwoo, Xiukai, and Isol. They have an ultra-attacking playstyle that works very well with Jackie’s aggressive nature.. While playing with these players in squad gameplays, you should easily beat squads containing Sissela, Rozzi, Soichi, and Silvia. However, Chiara, Isol, Emma, and Magnus can keep you on your toes.